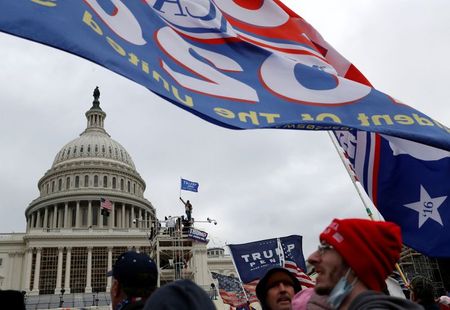 NEW YORK (Reuters) – Scenes of supporters of U.S. President Donald Trump storming the Capitol building to undo Trump’s election loss shocked the world on Wednesday, but most investors viewed the unrest as a short-term event that was unlikely to have a lasting impact on asset prices.

Money managers mainly focused on the prospect of more government spending after control of the Senate tipped to the Democrats in the wake of Wednesday’s runoff vote in Georgia, helped the S&P 500 and Nasdaq hit new records. Stocks did pare some gains as intensified.

“The markets are perceiving (the unrest) as a one-off event that hopefully won’t lead to anything further,” said Kevin Flanagan, head of fixed income strategy at WisdomTree Asset Management. “That’s why you’re seeing such a muted reaction.”

Yields on Treasuries, seen as a haven during times of market uncertainty, edged lower but still closed at their highest level since March on expectations of faster economic growth. The U.S. dollar index was last down 0.1%.

However, analysts cautioned about the potential for market moves if the situation worsens.

Tim Ghriskey, Chief Investment Strategist at Inverness Counsel in New York, also cautioned that if the situation escalates stocks could be hit but said investors were taking it in stride.

“This is a bit shocking visually to see this unfold on television for investors,” said Ghriskey, adding “This is going to pass and Biden will be declared President. That’s what investors appear to be saying.”

Prices for crude oil may be one area that could be vulnerable to profit-taking if the unrest in the Capitol grows more serious, said John Kilduff, partner at Again Capital LLC.

“It’s really unsettling … it’s a situation we are unaccustomed to,” he said. ”Crude has had a great run so it’s a great opportunity to book some cash because of what is transpiring.”

U.S. crude futures settled on Wednesday at $50.63 a barrel, and fell as low as $49.49 a barrel in the post-close trading. However, the oil market rebounded shortly after.

Most investors, however, remained sanguine, confident the situation would remain contained.

“Markets are reacting to this grim reality, yes, but they are not collapsing as many people still think the blue wave is secure after the Georgia vote and that more stimulus is coming,” said Max Gokhman, Head of Asset Allocation at Pacific Life Fund Advisors, Newport Beach, California. “However this could get messy and escalate and it is going to be very tense for a time.”