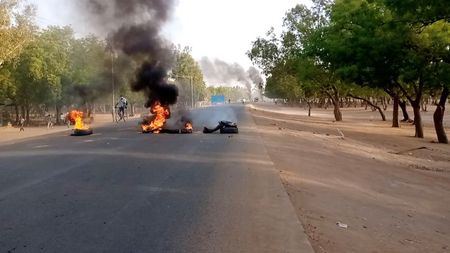 By Edward McAllister and Mahamat Ramadane

N’DJAMENA (Reuters) -At least two people were killed and 27 wounded in street clashes in Chad on Tuesday between protesters demanding a return to civilian rule and security forces, prompting key ally France to condemn the crackdown.

Tensions have been high in Chad since the sudden death last week of President Idriss Deby, who had ruled the impoverished desert country for three decades. He was killed on April 19 as he visited troops fighting rebels.

A military council headed by his son took control of the country after his death, but is facing resistance from some Chadians who crave change after Deby’s autocratic rule. Some opposition lawmakers describe what has happened as a coup.

Defying a ban on protests imposed by the military during a period of national mourning for Deby, demonstrators took to the streets of the capital N’Djamena and other urban centres to demand a transition to civilian rule.

A health official at a N’Djamena hospital, who requested anonymity, said one protester in his 20s had died and 27 others had been brought in injured. The cause of the young man’s death was not known.

Witnesses also reported the death of another protester in Moundou, Chad’s second largest city. Social media users said the man had been shot, but that was not confirmed.

“We do not want our country to become a monarchy,” said 34-year-old protester Mbaidiguim Marabel. “The military must return to the barracks to make way for a civilian transition.”

Reuters reporters in N’Djamena saw hundreds of protesters being dispersed by security forces using tear gas. Posts on social media said live ammunition had been used in certain places, but Reuters could not independently verify that.

Protesters burned tyres in several neighborhoods, and a Reuters witness said firefighters struggled to contain a blaze that was large enough to be seen from far away.

A spokesman for the authorities said security forces were attempting to contain the protesters while limiting material damage.

France, which has a military presence in Chad and was a long-term backer of Deby who it considered an important ally in the struggle against Islamist extremists in the Sahel region of Africa, condemned the use of force against demonstrators.

President Emmanuel Macron said in Paris that he “emphatically condemned the repression of the demonstrations and the violence that took place this morning in N’Djamena”.

Shifting his position after earlier backing the military council and its civilian allies, Macron called for a civilian unity government to be put in place to run Chad, a former French colony, until elections to be held within 18 months.

“I am in favour of a peaceful, democratic, inclusive transition, I am not in favour of a succession plan. France will never support those who pursue such a project,” said Macron in an apparent reference to the role of Deby’s son.

The military council has said it plans to oversee the transition, headed by Mahamat Idriss Deby, who has been declared president. On Monday, it appointed a civilian politician, Albert Pahimi Padacke, as prime minister of a transitional government.

Since then security forces have surrounded the home of at least one opposition politician, barring him from leaving. Dinamou Daram, leader of Chad’s Socialist Party, told Reuters he had been placed under house arrest and that supporters at the party’s headquarters were arrested as well.

Calm had returned to N’Djamena by midday on Tuesday. Trucks full of soldiers were seen patrolling the city centre.

Anti-French sentiment was running high among the protesters, who blamed France for having backed the military council against the will of the people. Posts on social media showed protesters burning a French flag.

Reuters reporters in N’Djamena saw businesses with French connections, such as a Total fuel station, being targeted by protesters.

Deby’s unexpected death came as the Chadian military are battling an insurrection by Libya-based rebels known as the Front for Change and Concord in Chad (FACT). The rebels came as close as 200-300 km (125-185 miles) from N’Djamena before being pushed back by the army.

In a statement on Tuesday morning, FACT spokesman Kingabé Ogouzeïmi de Tapol said that the group was being “bombarded from all sides” and was now on the defensive.

Chad’s military council rejected an offer from the rebels for peace talks on Sunday, calling them “outlaws” who needed to be tracked down and arrested for their role in Deby’s death. [L8N2MI0LQ]