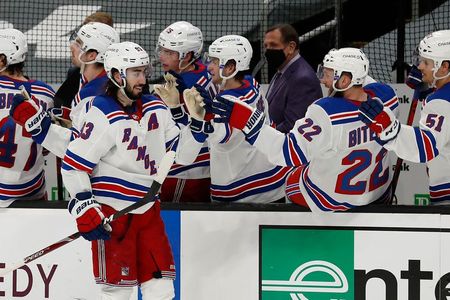 Mika Zibanejad, Alexis Lafreniere and Vitali Kravtsov scored in a span of less than five minutes during a four-goal third period, and the New York Rangers completed their season with a 5-4 victory over the host Boston Bruins on Saturday afternoon.

Zibanejad scored again late, K’Andre Miller also had a goal and Pavel Buchnevich had three assists as the Rangers snapped a five-game losing streak. Keith Kinkaid had 28 saves before exiting during the third with an injury; Igor Shesterkin stopped seven shots the rest of the way.

Pastrnak scored the 200th goal of his career 21 seconds into the third period to give the Bruins a 2-1 lead. The marker was his 20th of the season.

Kinkaid exited with 11:10 left after injuring himself stretching across the net on a Pastrnak chance, and Kravtsov’s goal from the slot at 9:36 gave the Rangers a 4-2 lead.

Marchand got the Bruins back within one on the power play with 5:52 remaining, but Zibanejad made it 5-3 New York with the 200th goal of his career at 18:07. Bergeron tallied with Rask removed from net with 1:21 left, but Boston couldn’t get the equalizer.

The Rangers got on the board first when Miller ripped a one-timer off a faceoff win past Rask at 6:21 of the second period. Justin Richards, making his NHL debut, picked up an assist on the goal. 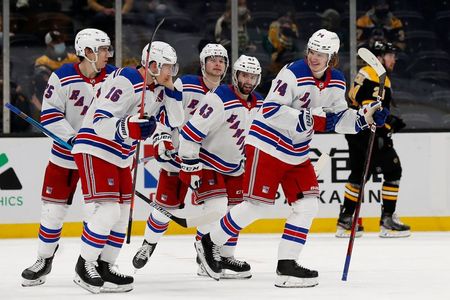 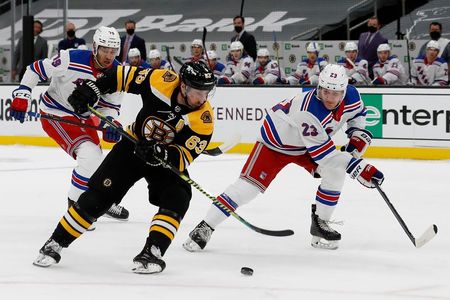 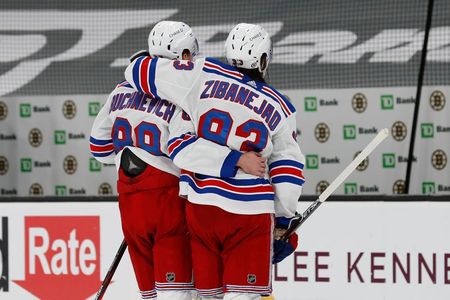