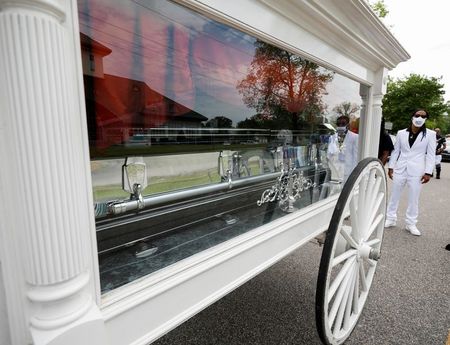 (Reuters) -An autopsy report released on Thursday for Andrew Brown Jr., a Black man shot by police as he resisted an arrest in April outside his North Carolina home, confirmed that he was killed by a fatal bullet wound in the back of his head.

Brown, 42, was shot as he tried to flee by car during a morning raid in Elizabeth City, North Carolina, a riverfront community where just over half of the roughly 18,000 residents are Black.

The 11-page summary of the autopsy findings confirmed the findings of a private autopsy conducted at the request of Brown’s family and the account given last month by a local district attorney, who said no charges would be brought in the case.

That decision prompted renewed protests in a country that has grappled with a wave of high-profile episodes of police killing Black men, leading to the largest civil-rights protest movement seen in the United States in decades.

The autopsy report was dated June 7 and released on Thursday by the North Carolina Office of the Chief Medical Examiner, and described the death as a homicide caused by “penetrating gunshot wound of the head.” The only other condition it listed as being significant in the cause of death was a gunshot wound to the right arm.

The office also released a toxicology report that found a low level of methamphetamine in Brown’s blood that likely did not play a role in his death.

Pasquotank County District Attorney Andrew Womble said on May 18 that he would not prosecute the officers who fatally shot Brown, concluding that their use of deadly force was justified because they felt their lives were endangered when Brown drove his car toward them. Brown was wanted on suspicion of selling illegal drugs.

Lawyers for Brown’s family said at that time that Womble was trying to “whitewash this unjustified killing,” and said videos of the shooting showed that officers were not in fear for their lives.

In a statement on Thursday, the family lawyers said: “Despite law enforcement’s and the district attorney’s best efforts to hide the facts in this case, and paint Andrew as a villain, we are confident that the truth will be revealed and justice will prevail.”

The killing captured national attention, fueling a debate over the way police use force against Black Americans following the conviction of former Minneapolis police officer Derek Chauvin for murdering George Floyd in a highly publicized trial.