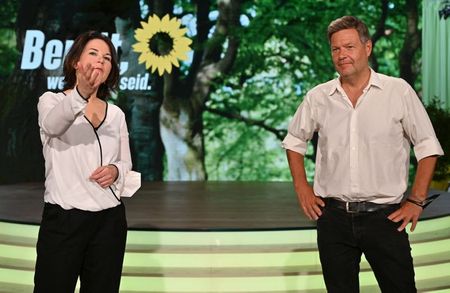 By Holger Hansen and Christian Kraemer

BERLIN (Reuters) -The leaders of Germany’s Greens will resist a push by party activists this weekend to adopt more ambitious climate policies, balancing their ecologist message with care to ensure poorer voters are not left out of pocket after September’s election.

The Greens, aiming to win the chancellery for the first time at the Sept. 26 federal election, surged ahead of Angela Merkel’s conservatives in polls in late April after they picked Annalena Baerbock as their candidate to run for chancellor.

A 40-year-old London School of Economics alumni and a mother of two, Baerbock intrigued voters with her pitch for a “new start” – only for the Greens to be knocked back by her admission that she did not declare a bonus payment last year, a suggestion by party co-leader Robert Habeck that Germany should give arms to Ukraine, and party plans to hike petrol prices.

A poll published on the eve of the conference highlighted the problem. While Merkel’s conservatives gained 5 percentage points to 28%, the Greens dropped 6 points to 20%.

Less than a week after having to alter some details of her online resume, support for Baerbock was down 12 percentage points from a month ago, with only 16% of those asked saying they would vote for her if they could elect a chancellor directly.

“Everyone makes mistakes. We have paid for ours dearly in the polls but now it is about doing better and it is not just about me but about how we can together change this country,” Baerbock told ARD television when asked about the new poll.

The fuel price debate has left Baerbock and Habeck keen to show “social balance” in the election platform to be agreed this weekend and to project moderation and maturity as they seek to reignite their stumbling campaign.

“Climate protection doesn’t exist for free, that shouldn’t surprise anyone now. The key is that it is socially cushioned,” said Danyal Bayaz, Greens finance minister in the southwestern state of Baden-Wuerttemberg.

The upshot is that the leadership will resist a motion to raise the CO2 levy for oil and gas, for example to 80 euros per tonne in 2022, instead of the 60 euros in 2023 proposed by the party brass. The leaders will also stress that revenues from the higher CO2 price would be channelled back to poorer people.

The three-day party congress starts on Friday. Party leaders are confident they will prevail in the CO2 pricing debate.

The Greens, who have seen membership swell from some 60,000 four years ago to 115,000 now, suffered a thumping by the conservatives in a regional election on Sunday but remain within a few points of their main rivals.

“The Greens will still go through many a storm,” publicist Albrecht von Lucke told Reuters. “Many citizens want the Greens in the next government, but not necessarily in the chancellery.” 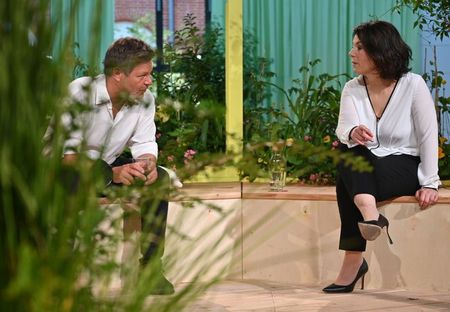 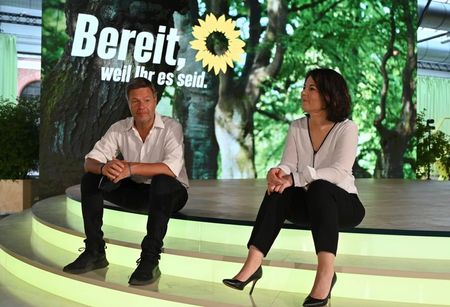 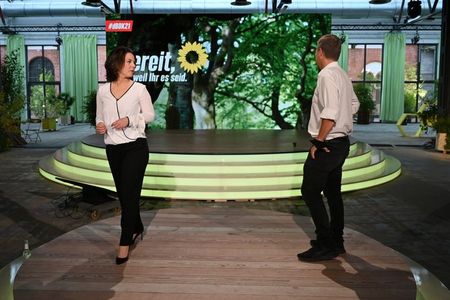