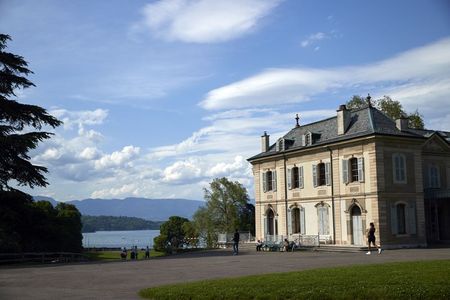 Biden-Putin summit details: up to five hours in a villa without meals

By Steve Holland and Stephanie Nebehay

GENEVA (Reuters) – The issues may be vexing, but the surroundings will be lush and serene when the U.S. and Russian presidents meet on Wednesday in a stately 18th century villa overlooking Lake Geneva.

The first face-to-face meeting between Joe Biden since he became U.S. president in January and Russia’s Vladimir Putin could run four to five hours or beyond while they discuss arms control, cyber-hacking and election interference.

But in a sign of the strained ties, it will not include any meals and the two will hold separate news conferences rather than a joint one.

“No breaking of bread,” a senior U.S. official told reporters as Biden flew to Geneva for the talks, scheduled to begin about 1 p.m. (1100 GMT) in Villa La Grange, an elegant gray mansion set in a 30-hectare (nearly 75-acre) park.

Putin arrives first at the villa, where the two will meet Swiss president Guy Parmelin before starting their talks in the library, which contains historic leather-bound volumes, including works in Chinese, French, Persian and Turkish.

Biden and Putin will meet together with their top foreign policy advisers, Secretary of State Antony Blinken and Foreign Minister Sergei Lavrov, as well as interpreters, before holding a larger gathering. Between 3,000 and 3,500 police and other forces are being deployed in the usually sleepy Swiss lakeside city.

The authors represented among the thousands of books at the villa include Charles Pictet de Rochemont, a Swiss diplomat who prepared the Swiss declaration of permanent neutrality – itself likely a factor in the choice of Geneva for the summit.