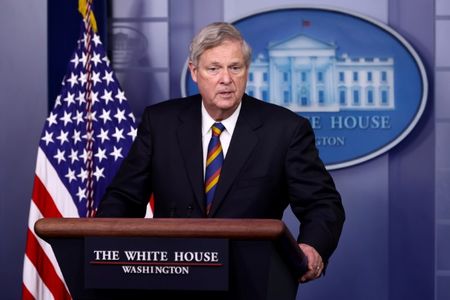 (Reuters) – U.S. Agriculture Secretary Tom Vilsack on Tuesday threw his support behind a proposal to establish a special investigator to address concerns about anti-competitive practices in the meat and poultry industries.

Republican U.S. Senators Mike Rounds of South Dakota and Charles Grassley of Iowa and Democratic Senator Jon Tester of Montana have proposed legislation to create an office for a special investigator within the U.S. Department of Agriculture.

U.S. lawmakers and the USDA are seeking to address concentration in the beef processing industry in the aftermath of a ransomware attack against meatpacker JBS SA that disrupted U.S. meat production and disruptions caused by the COVID-19 pandemic.

The proposed office would have a team of investigators, with subpoena power, dedicated to preventing and addressing anticompetitive practices and enforcing antitrust laws in meatpacking, according to a statement from the senators.

“I think it’s a good proposal,” Vilsack said at a congressional budget hearing. “I think it’s part of what needs to be done.”

Four companies including JBS in 2018 slaughtered about 85% of U.S. grain-fattened cattle that are made into steaks, beef roasts and other cuts of meat for consumers, according to the USDA.

The USDA has separately said it plans to strengthen its enforcement of a 100-year-old federal law intended to protect farmers and ranchers from unfair trade practices. The agency also said it will support increased processing capacity as part of a $4 billion initiative to strengthen the country’s food system.

(Reporting by Tom Polansek in Chicago; Editing by Will Dunham)