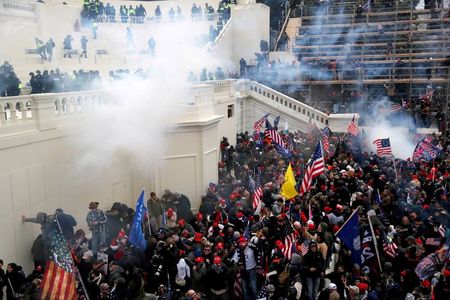 WASHINGTON (Reuters) – A federal judge ordered a California man tied to the right-wing “Three Percenter” militia movement to be released from jail while he awaits trial on charges of helping plan the attack on the U.S. Capitol by supporters of then-President Donald Trump.

The judge said in a ruling late Tuesday that prosecutors had not shown defendant Russell Taylor posed a threat to the public, noting he had not entered the Capitol building during the Jan. 6 unrest.

Federal prosecutors have charged more than 480 people with taking part in the violence at the Capitol, which left five dead. The charges range from trespassing to criminal conspiracy — with that latter charge aimed primarily at people linked to three right-wing groups, the Oath Keepers, Proud Boys and Three Percenters.

The ruling on Taylor, which came the day after a magistrate judge ordered the release of a former California police chief associated with the group, means that around half of the at least 26 members of those three groups charged have been released to await trial.

Taylor and six other people tied to the Three Percenters last week were charged with conspiring to plan the Capitol assault.

Tom Firestone, a former federal prosecutor now in private law practice, said: “If the defendant does not have a prior history of violence, did not personally engage in violence on Jan. 6, did not have a weapon on Jan. 6 and has not threatened witnesses or attempted to obstruct justice, it will be difficult to convince a judge that the defendant is a danger.”

In a three-page order releasing Taylor, U.S. District Judge Royce Lamberth said that while the defendant was in a crowd which surged on the Capitol’s west front, Taylor declined to enter the building “because he was carrying a knife”. In the months since the riot, Taylor “willingly submitted” to restrictions such as GPS monitoring, the judge said.