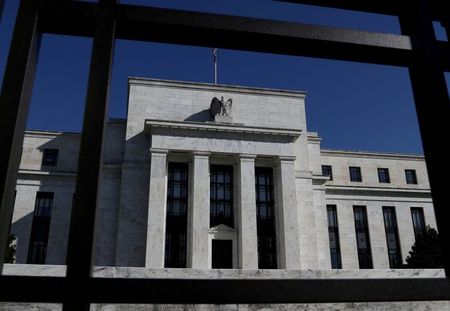 WASHINGTON (Reuters) – The U.S. Federal Reserve’s carefully crafted move last year to a jobs-first monetary policy, touted as giving workers their best chance after the pandemic, is being tested by a potentially table-turning rebound of inflation and what’s become a relative rush of policymakers determined not to let it get out of hand.

When the Fed unveiled its new framework just 10 months ago, with a view that employment could expand as much as possible as long as prices did not rise too fast, the language was kept vague on key points in order to maintain unanimous support. The limits to that “big tent” approach are now becoming clear.

Three months ago a clear majority of policymakers saw no rate increases for at least three years. Projections out last week showed fewer than a third remain in that camp, with a larger block who see liftoff by the end of next year on the basis of two months of strong inflation.

With a promised “broad and inclusive” jobs recovery still elusive, analysts parsing that large and fast shift wondered if the new framework was giving way to an old-school Fed debate over sacrificing more extensive job growth to keep inflation at bay – a tradeoff the central bank has acknowledged it too hastily accepted in the past.

The faster inflation and slower-than-expected employment rebound have taken officials “in a direction they were not expecting,” said Nathan Sheets, a former Treasury official and chief economist at PGIM Fixed Income. “Their framework is not designed so much to manage through episodes of high inflation” as to boost inflation that had been too low.

“It will be a more divided Federal Reserve than we have seen during the pandemic. Being true to the framework and balancing the risks is going to be a heavy lift.”

Fed Chair Jerome Powell has said it’s a feat that can be pulled off.

Whether he and the Fed’s other core policymakers remain convinced they can support a robust jobs recovery and control inflation will be the subject of intense interest in coming weeks, beginning on Tuesday when Powell testifies before Congress.

The new framework has made one clear break with the past.

Across the board, policymakers say they’ll accept a period of inflation above the Fed’s 2% target before raising short-term interest rates from their near-zero level. That aims both to allow more people to work – employment tends to grow when rates are lower and consumers spend more freely – and to offset a decade of inflation shortfalls.

Those anticipating earlier and faster interest rate hikes merely see inflation moving at a faster pace to, and for a time slightly above, the 2% threshold, St. Louis Fed president James Bullard said on Friday, counting himself among the seven officials anticipating rate increases in 2022.

Bullard sees a preferred measure of inflation at 3% in 2021 and 2.5% in 2022, and “that would meet our new framework…Other members have other forecasts” that warrant later rate increases.

“This is very much a debate about what is going to happen in 2022” with inflation, he said.

But it is also a debate that will measure how deep the commitment to the new framework runs, what magnitude of inflation “overshoot” different officials will tolerate, and how quickly the Fed reacts if higher inflation persists.

The framework is silent on those and other issues critical to key industries like autos and home building where sales are sensitive to interest rates, and for households wondering how long prices may keep surging.

Those increases have been “salient” already for households, yet the median of policymakers’ projections sees three years of above-target price increases, noted Randall Kroszner, a University of Chicago Booth School of Business professor and former Fed governor.

While last week’s shift in tone did not upend the new framework, he said, it did show the risks and limits of its application at a complex point in the economy’s reopening.

Can the Fed “tolerate three years?” of higher inflation, he said. “They have not been explicit…Nothing like this has happened before.”

It’s a debate that is also beginning to reflect what has not changed at the Fed under the new framework.

Powell and others say that in order not to act prematurely they are responding to realized data rather than forecasts.

“For me, the framework means, we really have to achieve maximum employment and we have to sustainably achieve 2% on average over time, and a few transitory high inflation readings do not meet the test for me,” Kashkari told Reuters on Friday.

Sixteen others are in the mix, too, with the framework silent on any agreed-upon definition of critical concepts like “maximum employment” to ground them.

Moreover, some aspects of the economy the new framework was meant to downplay seem to still be at work.

The Fed’s strategic shift deemphasized the so-called Phillips Curve, a longstanding tenet that unemployment and inflation are closely related and when one drops the other rises. Yet at his press conference last week Powell spoke as if that was alive and well, and that if inflation persists, it’s because the labor market has gone as far as it can go.

Asked why inflation might remain above target in coming years, Powell said that “by 2023, those increases are really about…rising resource utilization, or to put it a different way, low unemployment.”

In navigating its new approach, it’s now a race over how fast and fully the sometimes competing aims of maximum employment and stable prices arrive where the Fed wants them, and whether they get desperately out of sync along the way.