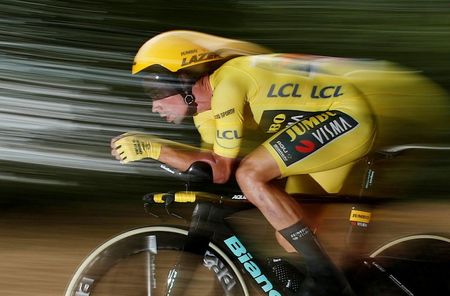 (Reuters) – Focus on road cycling at the 2020 Tokyo Olympics:

* Road cycling is split into two events for each gender — a road race and a time trial.

* The men’s race will see 130 participants, with a maximum team size of five, battling over a 234km course. Meanwhile, 67 women will race over 137km with an elevation gain over 2,692m.

* Both individual time trials are solo races against the clock.

Four gold medals are up for grabs – one each for men and women in road cycling and individual time trial events respectively.

WHAT CAN WE EXPECT FROM TOKYO?

In the women’s races, it will be hard to look beyond the Dutch all-star line-up of Marianne Vos, Van der Breggen and Van Vleuten. Their biggest challenge in the time trial should come from American Chloe Dygert, who aims to compete in both track and road events.

The races will end at the picturesque Fuji International Speedway, which hosted a number of Formula One races in the past.

Both the men’s and women’s road races will start in eastern Tokyo at Musashinonomori Park before finishing at the Fuji International Speedway motor racing circuit located at the foot of Mount Fuji.

The time trials will heavily feature the racing circuit, while also take the riders through countryside nearby.

According to a popular legend, the first ever bike race was held over a 1,200m course in Paris in 1868.

The sport went on to make its Olympic debut in 1896 and road events have been ever-present on the programme since the Stockholm 1912 Games.

Tokyo played host to the closest road cycling finish in Olympic history in 1964, when nobody was able to produce a successful breakaway and the top 99 finishers were all given a time within two tenths of Italian gold medallist Mario Zanin.

(Reporting by Hardik Vyas in Bengaluru, editing by Pritha Sarkar)