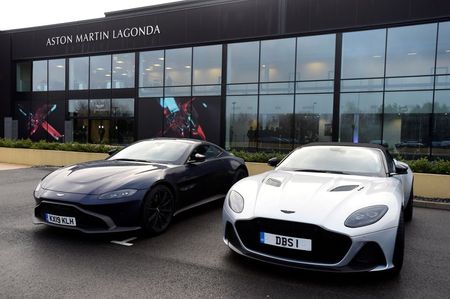 (Reuters) -Aston Martin is suing a Swiss car dealer that it says withheld customer payments for its $3 million Valkyrie sports car, ending commercial ties with the dealer that helped to finance the British luxury carmaker during a rocky period.

The London-listed company said it would now take customer deposits directly for special vehicles such as the Valkyrie rather than involve a third party.

Under a 2016 agreement, the Swiss company Nebula had helped to finance the development of the Valkyrie and other mid-engine cars, an area of focus for Aston Martin, in return for royalties from the carmaker.

Aston Martin said ending that contract meant it no longer had to pay future royalties, a claim Nebula disputes.

“We consider Aston Martin’s alleged unilateral termination of the contractual relationship with Nebula Project AG as illegitimate and unjustified and are prepared to pursue the necessary steps to preserve our rights,” Nebula said in a statement.

Analysts at A.J. Bell said in a note that the royalty component of the dispute was likely to be hard fought in court as Nebula had stepped in with funding during a “very rough patch financially” for Aston Martin.

Since going public in 2018, Aston Martin has burnt through cash, prompting billionaire chairman Lawrence Stroll to buy a stake in the company as part of plans to raise money.

Aston Martin on Tuesday projected a possible 15-million-pound ($21 million) hit to its 2021 results because of the alleged withheld payments from Nebula but said it was on course to meet annual financial expectations.

A source close to Aston Martin said its case would be filed in a Swiss court on Tuesday, though neither the source nor the company disclosed the size of damages being sought.

The Valkyrie is a limited-edition supercar that utilises Formula One technology and sells for about $3 million, though the company has not listed an official price. First deliveries are on track for the second half of this year, the company said.

Aston Martin is also ending agreements with AF Cars AG, which runs its St. Gallen dealership in Switzerland and is led by Nebula board members, saying that some cars were sold in breach of dealership agreements.