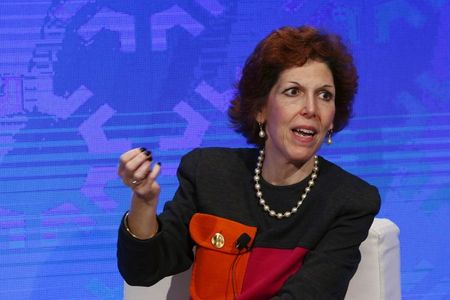 By Howard Schneider and Jonnelle Marte

Mester did not make a specific call in remarks at a Norwegian central bank seminar to tighten U.S. monetary policy now, or say that the Fed was already courting excessive financial risk with its current near-zero interest rates and ongoing $120 billion in monthly bond purchases.

But her criticism of the new framework opens another set of arguments about whether the Fed needs a quicker exit from the crisis policies used during the pandemic, and whether a strategic plan approved by a consensus vote at the Fed less than a year ago is showing signs of wear.

The Fed’s new framework is meant to push the country towards higher levels of employment by allowing periods of higher inflation. The strategy document does say that policy is contingent on officials’ “assessments of the balance of risks, including risks to the financial system,” a phrase some have interpreted as giving the Fed an out to shape policy as it wishes if financial risks develop.

But Mester said that during the debate over the new framework, it was generally agreed that the first line of defense for financial stability was strong bank regulation and other “macroprudential” tools that would not have the same blunt, economy-wide impact as raising interest rates or, in the current environment, curbing bond purchases.

“I do not disagree,” with that approach, Mester said. But if those other tools “prove inadequate, monetary policymakers should…be open to the possibility of adjusting their monetary policy settings in light of financial stability risk.”

Answering questions after her remarks, Mester said the Fed is keeping an eye on “frothiness” in valuations, but said she did not think financial stability risks were so elevated that the central bank would need to scale back monetary support.

“I don’t think we’re at that level where we’re facing that tradeoff between … macro policy tools needing to be dialed back because of financial stability risks,” Mester said.

Along with explicitly accounting for financial stability risks in monetary policy, Mester said bank capital rules may need to be “recalibrated” to match an environment where interest rates remain low and risk appetite is high, and that nonbank financial firms be more closely monitored.

Mester’s remarks come as the Fed is navigating a tricky turn in monetary policy, trying to remain true to a framework meant to encourage stronger employment, while also ensuring inflation does not move too high for too long. A period of inflation above the Fed’s 2% target is in fact wired into the Fed’s strategy.

But in practice that has led to a near even split among policymakers many of whom now see a need to raise interest rates as soon as next year, while others see rates staying near zero until 2024.

While those projections have been based on the more traditional central bank balancing of inflation and employment, some Fed officials have begun raising concerns that the Fed’s ongoing purchases of mortgage-backed securities, for example, may be raising the likelihood of a bubble in housing prices, and argued for an earlier end to those purchases versus Treasury securities.

But Mester said the approach used after the last recession would be familiar to markets and could serve as a “starting point” for the Fed now and be adjusted if needed.

After announcing its plan to reduce asset purchases in December 2013, the central bank cut its then-monthly purchases of $45 billion of Treasuries and $40 billion of MBS by $5 billion each at each ensuing meeting, wrapping up the wind-down by the end of October 2014.

“At this point I don’t necessarily think that we have to deviate too much,” Mester told reporters after the event, adding that the Fed would be transparent to avoid surprising the public.

JANE FRYER: After an estimated £3million in